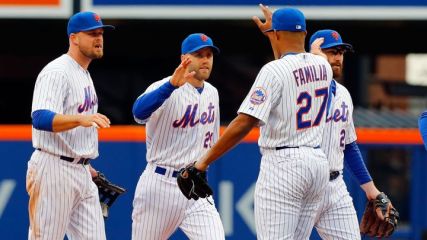 After remaining on the irrelevant for the nearly a decade, the New York Mets are back and making strides toward a progressive season in 2015. To talk about the Mets, I spoke with an insider and good friend of mine,Avery Decker of Mets Merized, a site that caters to everything about the Mets.

SA: The Mets have seen early season success, taking 1st place in the NL East and what has been the key for the Mets revival?

AD: You have to credit there pitching up to this point. Besides there early winning streak, the Mets haven’t really been hitting the ball all that much. They needed their pitching to carry them and continue to carry them. Bartolo Colon has been one of the better pitchers in the NL up until this point. Harvey is Harvey. The Mets have also received strong early season starts from deGrom and Gee. Now with their top pitching prospect Noah Syndergaard up, it’s tough to see the staff slowing down.

SA: The Bullpen has been the backbone for the teams early success, how far can this group of guys shoulder the load?

AD:The bullpen has been way better than expected. Nobody saw Familia emerging as the league leader in saves after he was penned to be the setup man before Mejia’s suspension. He has been electric on the mound and has embraced his new role with those intangible closer characteristics. There have been some other nice surprises this year as well from Carlos Torres and Erik Goeddell who have both been consistent. Keep in mind that this bullpen lost their best left-specialist early in the year, Jeremy Blevins to a fractured forearm. This team is also waiting for Vic Black and Bobby Parnell to return from injuries as well as Mejia to return after the All-Star Break. If the bullpen can hang on until the reinforcements arrive, the Mets will have a good problem.

SA:With Tulo taking himself of the trade block, what mid season move do you see the Mets making to improve their chances?

AD:This is a tough one to answer. From watching the Mets for so long and understanding the beliefs of the regime in place, I don’t believe they are going to make a move. Any pressure they have from the fanbase will be put off by justifying a lack of offensive production with the losses of d’Arnaud and Wright early in the season. However, I would imagine most logical Mets fans and writers know that ontop of those two, this team still needs another bat. Another place they’ve struggled is with their defense in the infield, again a product of some injuries. However, Wilmer Flores, the player the Mets hope can handle the SS duties, is leading the team in HRs and RBIs. Tough to take him out of the lineup. I would still argue that their isn’t really a small move to make because the rotation and bullpen are solid right now. Sure you can add a bench guy but that won’t do much and the Mets have some strong bench options in AAA. I think it’s boom or bust with a trade, you go after someone big or go with what you have.

The trade I would really like to see the Mets do is to trade Murphy. He has been a consistent hitter over the past couple years, but he will be a free agent this off season. He will demand more than I think he’s worth and probably more than the Mets will pay him. Rather than losing him outright, I would rather trade him for a young prospect or something like that. Alderson has proved his ability to acquire young guys who work in the minors and impact the team. I don’t think they will get much for him, but a contender can surely use his bat. It makes sense because he is a sub-par defender and if the Mets plan on running Flores out there everyday, they need a better defender to counteract the poor defense in the infield that exists already.

SA: Wild Card or NL East champs? Which one seems more possible for the Mets?

AD: I still don’t see the Mets making the playoffs this year. You look up and down the lineup and it isn’t scary at all. Again, this relates to injuries but still. The lineup isn’t that of a legitimate playoff team. Contender, yes. But I will take the under on this one.

SA: Last question, What has been your favorite Mets moment thus far ?

AD:It’s hard to pin one moment as my favorite one of all this season. I’ve seen Harvey pitch in person and that is an experience unlike any other. However, when I go to the ballpark, one thing I always look forward to is watching Lagares roam around in CF. His defense alone is worth the price of admission. Check out his highlight reels and see what i’m talking about.
For more on the Avery Decker and the Mets, check out Mets Merized at http://metsmerizedonline.com/