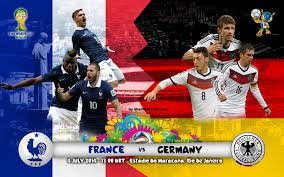 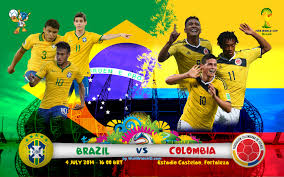 The dust has settled on the round of 16 and now only 8 teams remain as we look forward to the quarter-finals of the 2014 World Cup.  Friday’s matches include a clash between European powerhouses France and Germany, as well as an explosive matchup between Brazil and Columbia.  With berths in the semi-finals at stake, lets take a look deeper look at both matches heading into Friday.

We begin our preview with what most would consider the marquee matchup of the quarter-finals in France vs. Germany. France come into this game after a hard-fought 2-0 victory against Nigeria, needing second half goals by Paul Pogba and Moussa Sissko to advance, while the Germans needed extra time to see off Algeria.

The crucial question for Germany coming into this matchup is how they will line up on defense.  Against Algeria, Germany consistently left acres of space and channels for the Algerian attack to run through, and had Manuel Neuer not put on one of the best goalkeeping performances of this World Cup, Algeria may have been able to turn one or two of those chances into goals.

Germany seemed to respond well to a second half adjustment in that game that saw Sami Khedira replace Phillipp Lahm in midfield, with Lahm then slotting in at fullback. This is the best runout for Germany and the one we should see against France, because in this formation Khedira is able to provide a shield in front of the back four, while Lahm solidifies the flank and also offers an additional attacking outlet out wide. Germany should also be boosted by the return of Mat Hummels who had to missed the game against Algeria due to an illness.

As for France, the key for them in this matchup against Germany will be controlling and winning the ball back in the middle of the pitch.  It’s no secret that the Germans lack depth in the wide areas of the field, and look to play the ball through the middle with their midfielders.  However, the German midfielder’s have lacked form in this World Cup, with players like Mario Gotze and Mesut Ozil struggling to make an impact in the tournament.

This is where the athleticism of France in the middle of the pitch could be the area in which the game is won.  France can use their speed and quickness in the middle, with players like Paul Pogba and Yohan Cabye in specific, to press Germany hard and win the ball back these areas.  By doing that you get Karim Benzema and Antoine Griezmann out on the break, running right at a German back line that has looked questionable all tournament long.

France has made it to the semi-finals in each of the last five times they have made it out of round one, while Germany has made the semi-finals in three consecutive World Cups, so one of these teams will have their streak broken as the whistle sounds.  In the end, I believe the speed and quickness of France will be too much for Germany to handle.

After surviving a dramatic penalty shootout against Chile, the dream remains alive for Brazil heading into their quarter-final matchup against Columbia.  Outside of putting on an impressive display against Cameroon, Brazil have failed to live up to the hype surrounding this team coming into the World Cup, and on numerous occasions looked the lesser side on the field during the tournament.  Anything less than their best performance on Friday will see them exit the World Cup against a Columbia team that is playing the best football out of any team left in the tournament.

Brazil have a few concerns heading into this matchup, namely the fitness of star man Neymar who suffered a right knee injury in their win against Chile.  Neymar has found the net four times during the tournament, and has virtually singlehandedly led the Brazilian offense throughout this World Cup, and will be looked at to provide attacking inspiration for the squad despite injury concerns.

And while it remains true that Neymar at 85% is still one hell of a football player and can change a match in an instant, the fact that he comes into this match with fitness concerns puts more pressure on the other members of a lackluster Brazilian attack to step up.

While more subtle but no less equally important, the loss of Luis Gustavo due to suspension will also hurt Brazil coming into this matchup, as he would of been the player called on to keep an eye on Columbia’s James Rodriguez, who is looking to become the first player since 2002 to score in his first five matches in the World Cup.

The aforementioned Rodriguez is in the form of his life, and has been the key to the engine for a Columbia team that has scored 11 goals in all four of the match ups that they have won.  Clearly Brazil will have to make note of Rodriguez wherever he is on the pitch because if he is given even the smallest amount of space or opportunity, he can no doubt push Columbia singlehandedly through to their first semi-final in history.

All things considered, this matchup promises to be an explosive one between the two neighboring South American countries.  Brazil have yet to show their full potential in this tournament despite advancing this far, and with so much riding on the line against a CONMEBOL rival, this may just be the matchup that brings out the Brazil squad with we expected to see at the beginning of the World Cup.  The pressure is great, but I don’t expect Brazil to collapse.