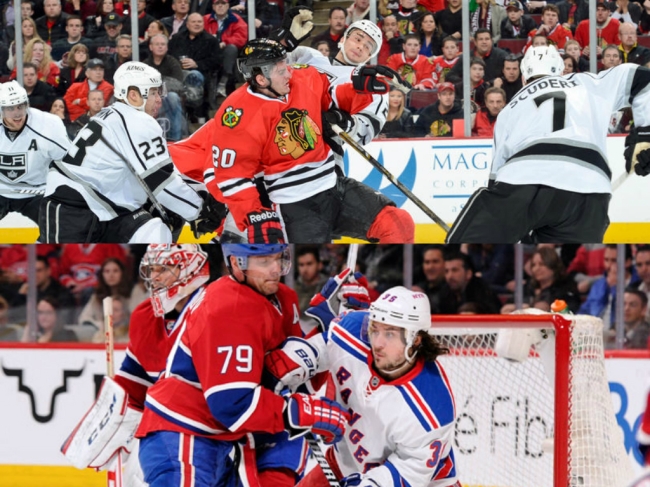 By Greg Hudson
As the Conference Finals roll around, it’s crunch time. It’s the business end of the playoffs and it’s the time when the players with the goods to deliver need to take the driver’s seat.
Insert another dozen cliches and you’ll sound just like the average New York sports fan who couldn’t name the Rangers’ second line but is a diehard Blueshirts fan come playoff season, dusting off the old Messier shirt to watch his team take on the challenge of a race for the Stanley Cup.
Cliches are common – perhaps too common – but the reason for their over-use is the fact that there’s truth to their meaning. While it isn’t quite time for “champions being made, not born,” it IS time to separate the men from the boys.
Eastern Conference – Montreal Canadiens v. New York Rangers
There are a lot of good men in this matchup. Habs boast the hardest-shooting man left in the playoffs in P.K. Subban, and perhaps the most under-rated goaltender in the National Hockey League: Carey Price. Max Pacioretty has come up big in tight games and scored pivotal goals this post-season, and the hard-hitting duo of Tomas Plekanec and David Desharnais have helped lead a devastating forecheck that even the tight-run Bruins defense couldn’t cope with.
But with all those strengths, the Rangers have a definitive edge in this series. And while a fair portion of that edge is due to the blinding form from tender Henrik Lundqvist, the real key to the Rangers’ edge is their belief. They have real he-men buried in the lineup, from the courage of Martin St. Louis carrying on after the sudden passing of his mother, to the physical toughness and work ethic of Carl Hagelin, to the determination of Rick Nash to find ways to contribute even when he wasn’t putting the biscuit in the basket. The Rangers put themselves against the wall against Pittsburgh but their rally has given them a surge of belief, and it’s visible watching them play.
The men: New York Rangers
The boys: Montreal Canadiens
Western Conference – Chicago Blackhawks v. Los Angeles Kings
When you look at this matchup it’s easy to understand why many hockey analysts believe that the winner of this series will hoist the Stanley Cup. These two teams have won three of the last four Cups, and it’s clear why. Chicago has perhaps the single best lineup in the National Hockey League, while the Kings bring an irresistible style and quality that even the best of teams can’t cope with.
Chicago is a team stacked with talent. They play hard, they play rough, they play tough, and they make you play their game if you want to beat them. They’re a team full of men, and the boys in the team quickly learn the way. They go into the Conference Finals with an undefeated record at home in the postseason this year and with home ice advantage, it should give them an edge in the series.
But like the Minnesota Wild, the L.A. Kings have just the right mix of quality, speed, and creativity to really give the Blackhawks a run for their money. And perhaps most importantly in this series, unlike Minnesota, the Kings don’t consider the Blackhawks a superior team. They aren’t afraid of falling behind in the series, or of having to win on the road. Both the Kings’ first two rounds went to game seven, and the Kings won both of those games away from home. But the real reason you can’t count the Kings out (no, it isn’t just Jonathon Quick, although he’ll be very important) is the fact that they play well under pressure. This postseason the Kings have played six win-or-go-home games, and won all of them, by mostly comfortable margins. If the Blackhawks don’t bring their A-Game for all 60 minutes of every game in this series, they won’t play for a chance to defend the Cup. That being said, if they do bring the A-Game, it will take a Jonathon Quick miracle to keep the tribe out of the Cup Finals.
The men: Los Angeles Kings
The boys: Chicago Blackhawks