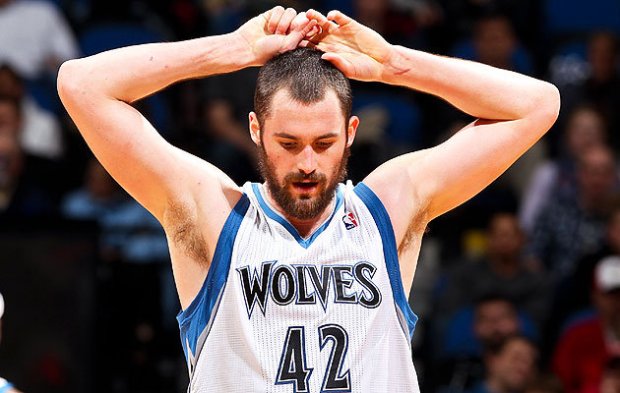 Seems like a redundant theme or trend for better terms, but Superstar or All-Star player leaves their small market in pursuit for a better team, richer lifestyle, more lucrative contract and fulfilling their dreams of becoming a NBA champion.  The latest player on the path to follow his personal endeavors is Superstar power forward Kevin Love. After a report given by Yahoo Sports on Sunday, Love intends to opt out of his final year of his player option and his name on the star studded free agent class of the summer of 2015.

There is no denying Love’s talent but I believe that he choice to share the news prior this year NBA draft and the season even begins put a lot of things in limbo, including his career. For example, what if Minnesota’s all or nothing attitude results in a trade to another small market team that is rebuilding to return prominence i.e. (Milwaukee Bucks who have a 25.0% percent chance of winning this year’s lottery) and you waste another year in your career and tarnish your market value from playing on a horrific roster.

With teams like Chicago Bulls, Golden State Warriors, Boston Celtics, Houston Rockets, Los Angeles Lakers and Phoenix Suns all on the prowl for the former UCLA standout, The Kevin Love Sweepstakes have begun.

Some of the teams in heavy discussion have been the Lakers and Celtics, who have seen their worst season in the years past, are now searching for the answer for their loyal fans are inquiring for Love’s availability. With Love being a California kid and Kobe on the waning years of his, it would seem fitting to pair the two for contention. With a possibility of obtaining a top-5 pick in years draft, pending on the bouncing of the balls, can put together the right offer to sway the superstar forward. Boston is presented with same kind of offer they have a great deal of expiring contracts along with the future draft picks obtained in their process of rebuilding. Boston has great deal with Minnesota dating back the KG trade with sent a boat load of draft picks that brought in players like Kevin Love, Ricky Rubio and honorable mention to Johnny Flynn.

Whether Minnesota wants to deal and reports have shown that are now more open to moving their star after years of watching him win the fans of Minnesota. With the fear of losing their star player like a LeBron James for nothing and are still searching for a light since his departure to South Beach.  They have been put in a hot seat to figure out how they are going to maneuver this upcoming season and future’s ones.

Love’s optimism puts a lot of things in motion, Timberwolves Front Office, Teams that need that extra star to win and the endless possibilities to acquire the All Star.  This saga should be an interesting one to watch as the moments pass by and more deals get put on to the table.  By June 26, 2014, we should have an idea of where the All-Star should be headed Minnesota cannot afford to miss out on the talent presented in years draft. They are bound to lose Love during the offseason and cannot sway any big names to come to Minnesota other than Kris Humphries, so do make a deal that ultimately make their team better and plan for the future is the best option available.