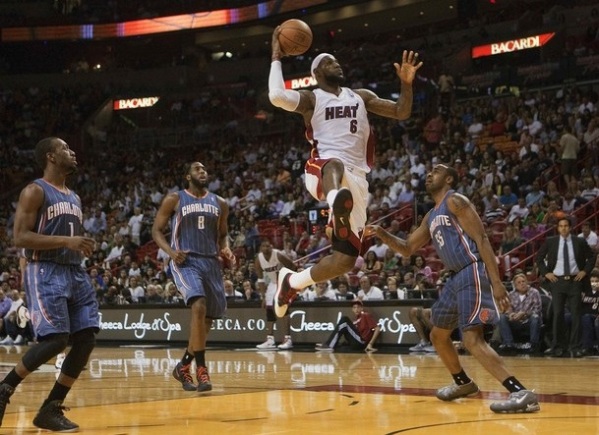 On the Eve of the kickoff to the 2014 NBA Playoffs, the media outlets are buzzing with match-up predictions, potential upsets and possible title contenders. It is that special time of the year again and it sure feels like we are in for a special couple weeks. With the two-time defending champion Miami Heat on a quest for a three-peat, the aging but stacked San Antonio Spurs team seeking revenge after a devastating Game 6 loss and the runaway leader for the 2013-2014 NBA MVP award  Kevin Durant in search of his first title the excitement for this year’s tip-off is unparallel.

So let’s take a brief look at our first round match-ups in. The number one seeded Indiana Pacers will face the eighth seeded Atlanta Hawks which has the potential to destroy some brackets. Since March 1, the Indiana Pacers have only won 12 of their last 25 games and in the month of April their All Star center Roy Hibbert has struggled; averaging 6 points 3 rebounds and 1 assist. It has been the total opposite with the Atlanta Hawks who turned it on late in the season to crush the playoffs hopes of the dismal New York Knicks. But I believe even with the Pacers limping into the playoffs mentally they will still come out the first round victorious but not without a good fight put up by the Hawks. Pacers in 6.

The two/seven match-up between the Miami Heat and the Charlotte Bobcats will not end in any surprise. Although Al Jefferson has had an All Star caliber season, the suffocating defense of The Miami Heat paired with the strength and greatness of the reigning league MVP Lebron James will prove to be too much for the young Bobcats team and they will fall at the champion’s feet. Heat in 4.

The young and slightly underrated Toronto Raptors may just shock the veteran Brooklyn Nets in the first round. Experts may be under estimating the squad led by first time All Star Demar DeRozan; ability to get up and down the floor which can tire out the older Paul Pierce and Kevin Garnett. The Raptors will pull off the upset of the East. Raptors in 7.

The mighty Bulls, led by the man with a heart of lion, Joakim Noah will face one of the best backcourts in the East with the Wizards John Wall and Bradley Beal. This match-up may be the most intriguing of the first round in the East. The Bulls at times struggle offensively and on conversely the Wizards excel in this area; this will prove to be a true war between offense and defense. Not to be cheesy and quote one of the best movies of all time, Love & Basketball; “offense sells tickets, defense wins games”. Nonetheless Bulls in 6.