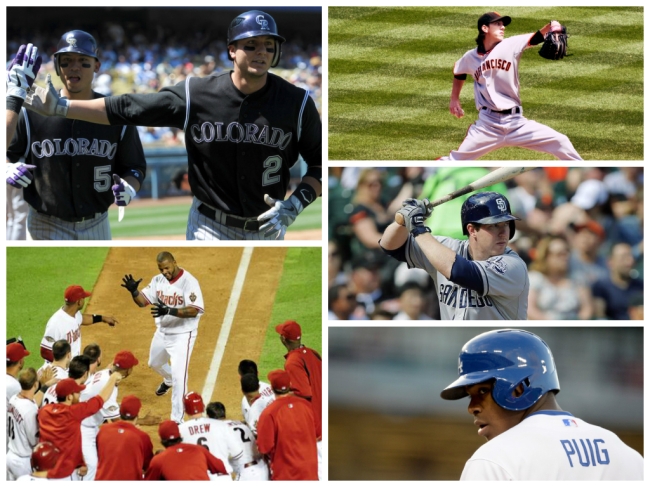 For the NL West, the 2012 and 2013 seasons were about two teams: in 2012 it was the eventual World-Series-Champion San Francisco Giants, and in 2013 it was about the Los Angeles Dodgers. The 2014 season seems set to be a potential showdown between the two organizations since the times when they played at Ebbets Field and the Polo Grounds. But appearances can be deceiving and improvements for other teams may make the NL West anyone’s to take.

Arizona Diamondbacks (81-81, 2nd in 2013)
The fact that a .500 record was good enough for second place in the division last season shows the weakness of the division on the whole. But thanks to a good offseason the Diamondbacks will be looking to finish well above .500 this year, and it will be thanks in no small part to their work to bolster the pitching staff. Veteran starter Bronson Arroyo and new closer Addison Reed will look to keep the Snakes in the playoff hunt with consistent results, while slugger Mark Trumbo joins a powerful lineup that already features Martin Prado, Cody Ross, and Paul Goldschmidt, who all know how to swing a bat.
Don’t expect to see them in October, but don’t expect them to drop out of the race in the early going.
Colorado Rockies (74-88, 5th in 2013)
To think that just seven years ago the Rockies rode momentum into a World Series appearance, it’s hard to fathom how far the nearly-mighty have fallen in just a few seasons. The glory days of Matt Holiday and Ubaldo Jimenez are long gone, and last season showed it as the Rockies finished at the basement of the division.
But there remains potential for the team, albeit it mostly in the form of some relatively unknown quantities. Starting pitchers Brett Anderson and Jordan Lyles join a rotation that is wholly devoid of spark. Anderson put up mixed numbers during his time in Oakland while Lyles’ numbers with Houston are atrocious – but that may be a product of playing for baseball’s worst team rather than a lack of ability or grit.
The lineup has potential too, as Justin Morneau joins the likes of Troy Tulowitzki and fellow ex-Twin Michael Cuddyer in the thin air of Denver – and that could be a big factor in improving the offensive production the Rockies need if they want to reach the .500 mark again this season.
Los Angeles Dodgers (92-70, 1st in 2013)
The Dodgers won the NL West by 11 games last season with a record which may not have even earned a wild card in the American League. But the Dodgers don’t lack fire power – or star power, for that matter, with names like Clayton Kershaw, Brian Wilson, Yasiel Puig, Matt Kemp, and Adrian Gonzalez at the club.
But despite the efforts of Cy Young-winner Kershaw and former Cy Young winner Zach Grienke, the rest of the rotation was less than stellar. Paul Maholm and Dan Haren – veterans both, join the rotation this season with a view to changing that.
The lineup, meanwhile, looks much the same, except for the addition of Alex Guerrero at second base to replace the outgoing Mark Ellis, and one would expect them to continue their high-powered offensive push for the playoffs, but don’t expect them to win the division by 11 games this season.
San Diego Padres (76-86, 3rd in 2013)
After years of disappointment the Padres showed significant signs of improvement last year, although the faithful shouldn’t get too excited, as their third place finish was largely due to the inexplicably poor season from the reigning champion Giants.
But that being said, there’s hope for this Padre’s team, thanks in no small part to some major moves in the pitching department. Highly-touted Josh Johnson joins the rotation, and relievers Alex Torres and Joaquin Benoit come to help a bullpen not know for reliability put more marks in the W column.
The fairly young lineup has room for improvement, but that improvement is likely to come with time. Jedd Gyorko and Yonder Alonso are only 25 and 26, respectively, and with more experienced sluggers like Chase Headley and Will Venable in the lineup to mentor them, they could grow and mature in the kind of players that could give the Padres faithful a .500 season again soon – just not this season.
San Francisco Giants (74-88, 4th in 2013)
Hero to Zero.
The phrase sums up the Giants season in 2013, the year after waltzing to their second World Series title in three years. But while some consider it a one-off season, there remain struggles if the Giants want to make another run deep into October in 2014.
Limited off-season moves saw only two big names join the team – but they were big names. Michael Morse joins the outfield while Tim Hudson joins the rotation. But both these players embody the struggles that face the Giants: they aren’t getting any younger. Wrist surgery sidelined Morse for much of last season, while the 38-year-old Hudson has already undergone Tommy John surgery and frankly doesn’t have that many good years left in him. The bullpen is comprised almost exclusively of soon-to-be pensioners and youngsters without much experience but plenty of promise.
The lineup is much the same. Marco Scutaro is 38, while the rest of the infield features Brandon Crawford, Buster Posey, Brandon Belt, and Pablo Sandoval, the oldest of whom is the 27-year-old Sandoval. And it’s the Panda who likely holds the key to the Giants’ playoff potential this season: the pudgy third baseman has dropped over 30 pounds since the end of last season and is determined to lose even more of the chub that earned him his nickname, and a healthier, more productive Sandoval could be the catalyst the Giants need to put them back in contention for October.
Prediction:
1st: Dodgers
2nd: Giants
3rd: D’Backs
4th: Padres
5th: Rockies