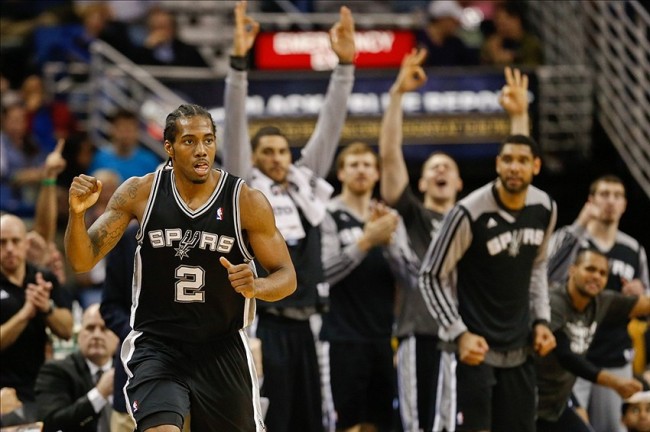 As the NBA season comes to end and the playoffs are set to begin, everybody has started to pick their favorite for the NBA Finals even their winner. The Heat are definitely the favorite win again and complete their 3 peat and the others believe it could be the Pacers or even the Thunder. What about the Spurs? Oh yeah, The Spurs, they’re good but their too old, they can’t do it again, they’re not going to win in the playoffs.  One thing the Spurs have that no other team embodies, consistency, whether it is in their criticism or their play, San Antonio is the model team in the NBA.

The Spurs are currently 44-16 and sit 1.5 games the Western Conference leading Oklahoma City Thunder. A year removed from their first finals appearance since 2007, where they defeated Lebron James and his then Cleveland Cavaliers. The Spurs were a play or two away from locking up their 5 finals win in franchise history, all under Greg Popovich but fell short after a daggering 3 pointer by Ray Allen. But since the loss in the finals, The Spurs have not lost the pep in their step.

The San Antonio Spurs have remained the cream of the crop of the NBA for the past two decades and have not received any acknowledgment for their winning efforts. Some may chastise the Spurs “boring” fundamental style of basketball, but it remains clear that all they do is win. Their brand of basketball is not one you would not want to see on a consistent basis, for what I’m not sure, but they continue to play team basketball and make everyone around them better. Their boring brand of basketball still ranks them Top-10 in PPG, Assists and Points Allowed per game.

The Spurs currently do not have one player that averages over 20 points per game, which is impressive compared to each team that depends on one player to score all the points. Some complain and say where the star power for the San Antonio is, but they still have arguably the best PF ever in Tim Duncan still averaging a double double, one the best PG’s in the league in Tony Parker, the sometimes lackadaisical Manu Ginobli and the young budding star in Kawhi Leonard. It’s not about the star power in San Antonio, it’s the players like Patty Mills, Tiago Splitter, and Marco Belinelli that matter to the Spurs. They currently have 6 players that average double digits in scoring and are a great example of how to win as a team.

Since the 1999 season, San Antonio has not lost less than 50 games in a season. Their lowest win mark during that stretch was when they won 50 games in the 2012 season, where they ended up losing the young, hot Thunder teams that starred James Harden, Russell Westbrook and Kevin Durant.  The Spurs not only have won during the regular season they have also reigned supreme in the playoffs as well. San Antonio has not missed the playoffs since the 1997-1998 season, while collecting their 4 championships during that era.

If winning doesn’t impress you then I don’t know what will. The Spurs look to be the underdog again this season after winning the Western Conference last year and remaining in the same position they were a year previous. They could make a big statement this in the playoffs again if health is by their side and could end up competing for a ring one more time, the 6th time in 2 decades. Tonight’s rematch of last year’s finals should be a great measuring stick for both the Spurs and Heat as they remain in their winning ways respectively.