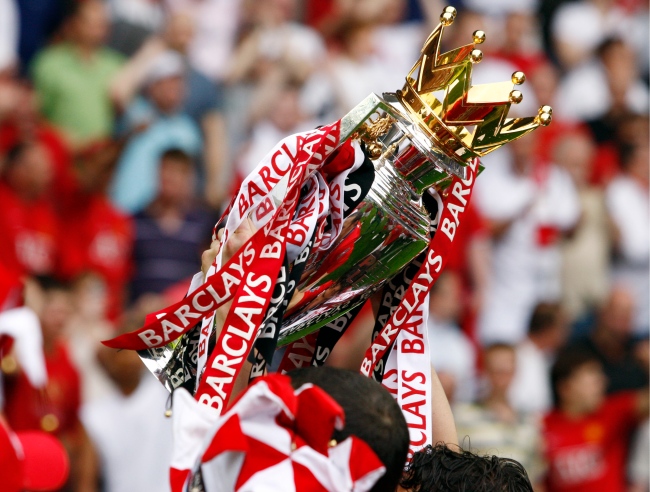 By Greg Hudson
In August the big talk of the Barclay’s Premier League was whether David Moyes would guide Manchester United to yet another league title in his first year after taking the managerial helm from Sir Alex Ferguson after 27 years in the Red Devils’ dugout.
As the season heads into the final 10 weeks, however, the discussion is very different. Not only are there four clubs currently contending for the title, but Manchester United are nowhere to be seen at the top of the table, where they have finished in the top three since the founding of the Premier League in 1992.
Instead, the focus of debate and speculation centers on who will lift the trophy in the absence of the perennial giants. London clubs Chelsea and Arsenal lead the way thanks to their stifling defenses, while United rivals Liverpool and Manchester City trail by the slightest of margins with their high-powered attacking play. With the top four clubs separated by a total of only four points with eleven games to go, truly any club can win the title in a season where anything can – and often does – happen. Here’s a club-by-club rundown of each team’s chances of glory.
Arsenal (2nd, 59 points)
Arsenal have the joint second-best defensive record in the Premier League, having allowed just 27 goals in 27 matches. But their struggles on the road have been well documented, including away losses of 6-3 to Manchester City and 5-1 to Liverpool. They still have games against Chelsea and City yet to come in the final 10 matches and taking the points in those games will be crucial. They’ll need to get their offence firing on all cylinders to make that happen, and with their lone striker Olivier Giroud struggling to find form in recent weeks, it will be a tough ask for the team that have topped the table for most of the season to take it back again.
Chelsea (1st, 60 points)
Chelsea have conceded just 21 goals all season while finding the net 49 times. But while they have yet to lose at home, they have a crucial away game at Anfield against Liverpool, who have lost just once at home all season and have the league’s best offense. They’ll need to shut down the Reds if they want to stay at the top. They played well in a 2-1 win against Liverpool at home in December but faced a Reds side without striker Daniel Sturridge, and were the beneficiaries of several questionable decisions that may have influenced the outcome. They’ll need to play almost perfectly if they want to repeat the result this time around.
Liverpool (4th, 56 points)
Few pundits would have thought that with 10 matches to go, Liverpool would be contenders in the title race, albeit as dark horses. But the Reds have a lot to recommend them, namely their lethal striker partnership of Luis Suarez and Daniel Sturridge, who have combined for 41 goals this season, more than 15 league teams have scored in total. But defensive struggles have plagued them at the back and costly errors have left them four points out of first place. That being said, unlike their competitors, Liverpool have neither the Champions’ League or the FA Cup to distract them from their task, and will be focused entirely on finishing as close to the top as possible. While they lost away to both City and Chelsea, the Reds have a stellar home record, winning 12 of their 14 games at Anfield, losing just once. They’ll need to continue their home form and clean up their defensive performance if they want to win the title, but make no mistake about it, Liverpool are very much in the race.
Manchester City (3rd, 57 points, +1 game to play)
The upstart rivals of neighboring United, City are looking to win their second title in three seasons, and boast both the second-best attack and second-best defense., and after winning their first 11 home games this season, City looked odds-on favorites to keep the trophy in Manchester. But a recent run of poor performances including a shocking 1-0 home loss to Chelsea and a 0-0 draw away to Norwich City leave City four points behind Chelsea, albeit City have an extra game to play. The Citizens certainly have both the quality and depth of squad to win the title, and their veteran base of players who won the title in the dying seconds of the 2011/12 season won’t be fazed by the prospect of rallying to win the title. But they have away matches against Arsenal and Liverpool to come, and both those teams will be hungry to avenge defeats at the Etihad Stadium earlier this season. They have a tough challenge ahead, but in the end, they’re probably more than up to the task, even with their Champions’ League aspirations to distract them.
Prediction
Champions: Manchester City
2nd: Liverpool
3rd: Chelsea
4th: Arsenal